Melencolia I is one of Dürer’s most famous pieces1. The art includes some signature symbols of Dürer, including a ladder and hourglass. The subject of the piece is a melancholy angel who stares off at something out of frame. The angel is surrounded by many creatures and objects, including a cherub, a sheep, a bell, some scales, a polyhedron, crafting tools, and Dürer’s Magic Square. The background of the art depicts a bright sun shining over water, with a “Melencolia I” scroll placed in front. Through use of light and shadow, Dürer was able to create depth through the many objects he depicted, creating a plentiful, yet beautiful environment.

Muralist James Sicner recreated this work for the mural. On the front of the mural at its leftmost side lies Sicner’s version of Melencolia I that is almost exact, except for some omitted pieces. For example, the sun background was instead replaced with another work of a lion with a pillar. However, the same, awe-inspiring detail and feeling was retained through this recreation of Dürer’s masterpiece. While both are extremely similar visually, Sicner flipped Melencolia I so that the angel would stare towards the center of the mural, using Melencolia I as a border to his work. 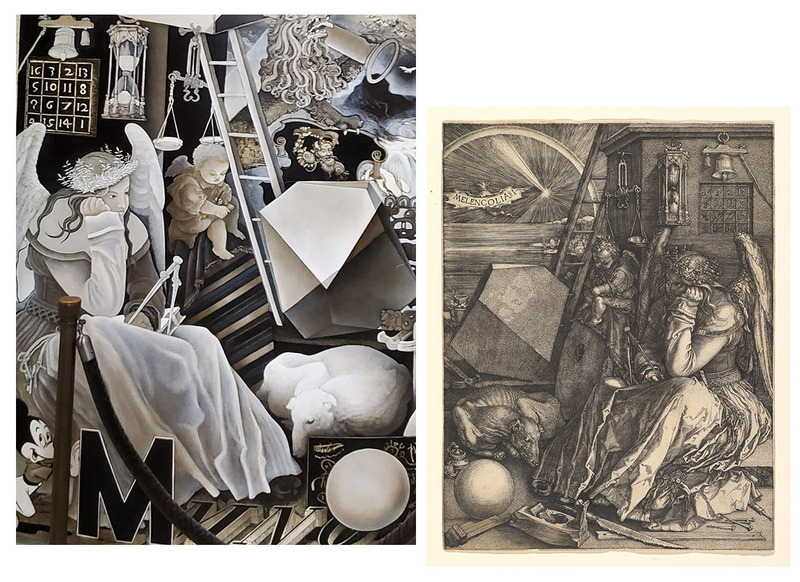 Explore items by clicking on the interactive picture below.